Play it on Itch.io!

Project Necromancy is a project I started together with Dirk de Kok as a graduation project. It was my intent of creating a game from scratch with a small team and learning C#.

Because of the coronavirus, finding an internship was hard for a lot of people which gave me an opportunity to find teammates for this project. Over the course of 5 months, we managed to create a proof of concept, which has been published on Itch.io.

I created the concept, based on the Necromancer class fantasy from games such as Warcraft 3, Diablo 2 and Path of Exile. I was also responsible for most of the design and managing of the team.

MY ROLE WITHIN THE PROJECT: Project Lead, Game Designer

The initial concept that I came up with shared a lot of similarities to Warcraft 3’s gameplay. To prove the concept, I made a quick prototype in a day inside of the Warcraft 3 engine. With this prototype, I noticed a couple of issues:

I took this data and made some changes to the controls: 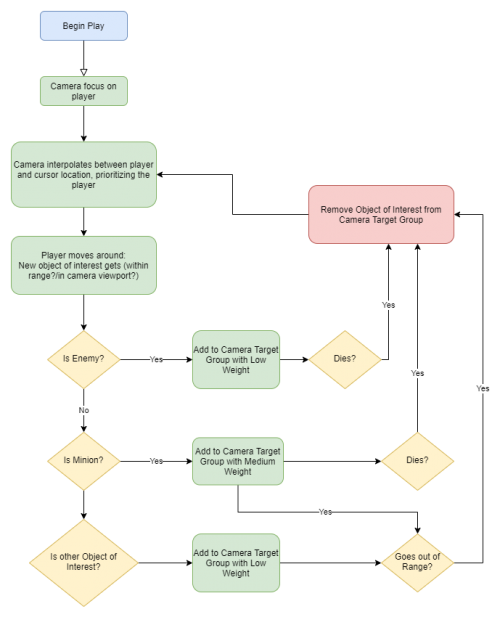 Early flowchart of the Camera Director.

After this prototype in Warcraft 3, we quickly moved on to making a prototype in Unity. We wanted to see if we could pull the AI and army controls off without our code and the design becoming too complicated. We finished the prototype and noticed some more issues:

We brainstormed a bit on these issues and we came up with the following solutions:

In this early version of the tech prototype, you can see the camera issue very clearly when moving down.

The Ballista enemy is effective at destroying lines of your minions.

The Archer Tower kills your minions from afar without yielding corpses. Destroy them quickly!

In my initial designs, we would have different enemies with different abilities (such as ranged enemies) and those would yield different minions for the player to utilize. However, because of the limited time we had, implementing these became impossible, next to the tower enemies we already had decided on. I considered making enemies and minions have levels (or stats), but that would be very hard and complex to explain to the player without investing considerable time in the UI and UX.

We still wanted some variety, so we had to create some that did not cost a lot of development time. As a test, I copied the standard enemy, increased its health and damage and size. I quickly playtested this, and it turned out that players absolutely loved reviving these bigger units. The responses were so positive, that in the end, we added two even larger enemies to the game and even made them a shop purchasable later on in development.

This mighty bridge guardian will prove an excellent addition to your army!

After the first prototype, we knew our AI would be relatively complex. We wanted to have an AI system that would drive both the players’ minions and the enemy characters. We created a finite state machine which allowed us to debug more easily. We divided the AI up into: 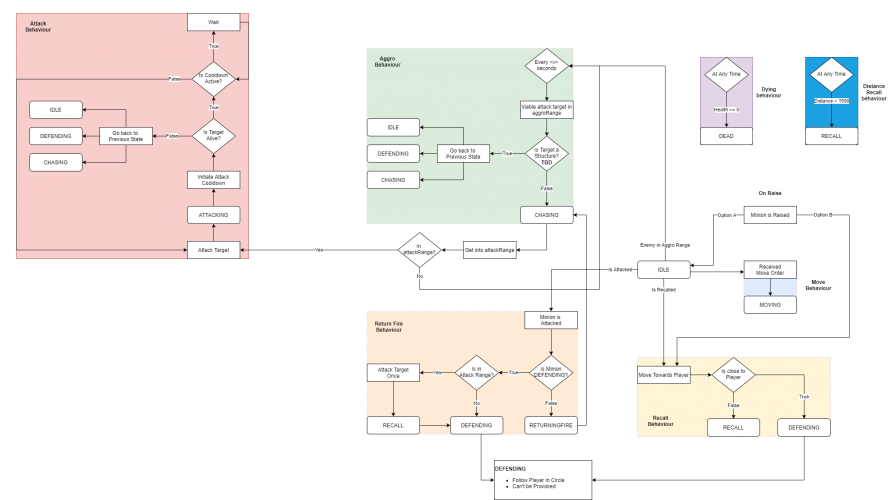 Early diagram of the state machine we made for most of the AI. Click the diagram for a full view in diagrams.net

For me, it was important that player fantasy controlling a horde of minions was kept intact. Hence why I wanted to make sure they attacked things on their own. One of these points was destruction.

Early on in the project, I added Cell Fracture to some models I made in Blender to make real-time destructables that would simulate physics as soon as destroyed.

I applied these to the destructables we had and along with the minions destroying an entire town, felt great for players.

This was already a lot of fun to play around with, but there were still some things missing. I added in:

I noticed during playtesting that players often left potential minions behind because they did not notice them. One of the last additions I added was creating a ‘revive’ marker over fallen enemies that could be revived.

The revive marker I added in later, to give some clarity over which corpses can be raised.

Early test with character models from the asset store. Here you can see the first destructible barrier in action.

I modelled a simple house in Blender and went through the same procedure. The procedure was spectacular and a bit over the top, but everyone loved it. Later on, we replaced the simple house model with a better one.

Here you can see the final destructible barrier, as they are currently in the game.

Back to Projects
Back to Top